I’ve traveled all around the world to many cities, both large and small, and the difference in city layouts has always interested me. When strolling through cities, I’ve often wondered, “exactly how many of these city blocks are in one mile?”

The number of blocks in a mile might seem like an easy question to answer, but in reality, it varies between each city or even direction. One city might only have nine blocks per mile while another might have 30 blocks per mile. It all depends.

In this article, I will explain what a city block is, discuss grid plans, and answer how many blocks are in a mile.

What is a city block?

A city block (also known as a block) is an area of land that is surrounded by streets. Each city will have different sizes and shapes of blocks. Some blocks might be square and some might be a rectangle, but blocks are created because of grid planning.

A grid plan is simply a city development strategy that has streets running at right angles with each other.

The whole point of a grid plan is to have buildings built between roads utilizing space efficiently. Buildings are typically cheaper and more efficient to build when using right angles for streets. This also allows land not to be wasted. Take a look at The Great American Grid and how varied some of the city grid layouts are.

Each city, no matter the block size, is created via a grid plan for the efficiency for building while also allowing upward expansions.

However, not every grid plan has right angles

Grid plans are meant for futureproofing a city for new residents and building expansions, while at the same time making it easy to walk and drive for residents of the city without the need for navigation since city roads should bear the directions of a compass.

Building regulations can become standardized when angles are all the same throughout the city. Therefore, each city has a signature city street network orientation where most city streets bear the direction of a compass. Take a look at this diagram by Geoff Boeing. Grid plans typically take place at the creation of the city. Some cities might overhaul their whole network of roads, but a city might use the same layout of roads as the beginning of the city’s creation.

However, events in a city’s history can shape the way grid plans are played out. Take a look at Boston. The reclamation of land from the harbor and suburbs created roads that spread different directions than Boston proper roads. Why? Those reclaimed areas had roads that weren’t following Boston’s grid plan. During the Boston expansion, Boston left those reclaimed roads creating a network of roads that weren’t consistent.

Another example would be Charlotte and how roads go in every possible direction. It’s a city where people have to use landmarks to navigate the streets. The city ended up using spaghetti-like roads throughout the city from old farmland paths. It was also because of the lack of future-proofing the city for expansion, unlike other cities like New York or Chicago.

Blocks are all shapes and sizes

Blocks can vary between cities. There might be more blocks in one city than another city. Moreover, there could be varying sizes of blocks in a single city. Blocks can be any shape, they don’t have to be exactly a square or rectangle. Sometimes blocks can even be a triangle.

In addition to the different shapes and sizes, the number of blocks might vary based on the direction you go. It might just depend on the perspective you look at the blocks.

How many blocks are in a mile?

From our sample size below using major cities, the average number of blocks in a mile would be 20.3 blocks. However, blocks can vary dramatically between each city or even direction. So, it’s best to use specific cities as examples.

Probably the most famous city that comes to blocks would be New York City (NYC). NYC is not only the biggest city in the United States but everything in the city is measured by how many blocks it is to get somewhere. Even the streets can show the number of blocks it is to your destination.

And the story of how the grid plans in NYC came into fruition is not only interesting but created the most perfect block structure ever.

Travel tip: If you were staying in NYC and want to tour around, you might be interested in our top 10 completely touristy things to do in NYC article.

Washington DC is a lovely city to eat, visit the neighborhoods, and learn all about history in. Washington DC to this day is one of my favorite cities for museums.

Washington DC blocks differ in size where some blocks will be slightly bigger than others. The number of blocks per mile come out to:

Washington DC is definitely no NYC, but still walkable with a decent amount of blocks per mile.

One of my favorite West Coast cities would be San Francisco. From all the places you can eat to the diverse neighborhoods, you can find something that you love in the rolling hills of San Francisco.

San Francisco blocks aren’t crazy different lengths like NYC, but still slightly different in the direction you go. The number of blocks per mile are:

Travel tip: If you find yourself in San Francisco, you might be tempted to walk, as I have for miles. However, as it’s so hilly, you might be better off riding the Cable Cars or taking an Uber to your next destination. 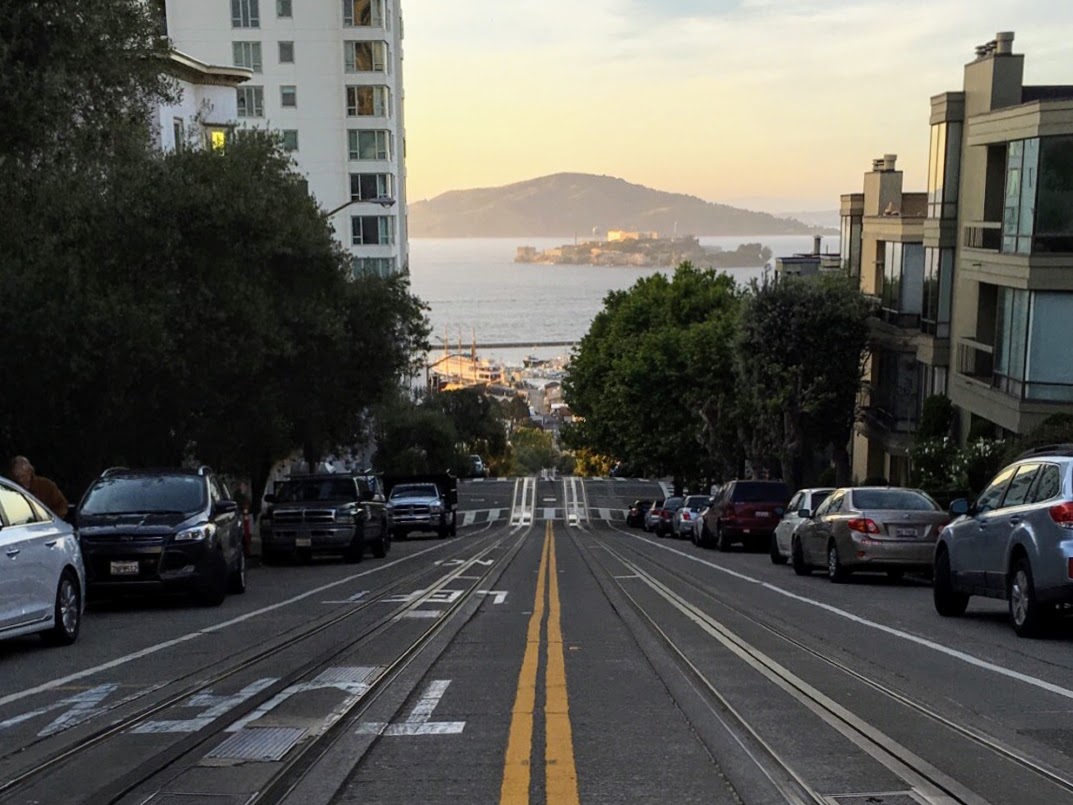 Boston is an underrated city and I think worth a visit at least once in your life. It holds lots of history and food hotspots that aren’t really known but should be. Boston also holds a unique competitive market for aviation with many long-haul flights from foreign and American carriers all competing for a spot.

Blocks in Boston are very much like NYC, longer in one direction than another. The number of blocks per mile in Boston is:

Unlike most modern American cities, Boston’s grid plan is not the most organized. Charlotte and Boston have streets going in almost every direction, instead of the usual grid plan that other cities use.

Boston caters to almost every direction, with its disorganization, making it truly special because of its unique history of reclamation of land and annexation of neighboring suburbs. Many Bostonians are more used to using landmarks to navigate their city.

Travel tip: If you hit up Boston, don’t forget to try some baked beans, plus everything else like arts, food, and culture that make Boston a great place to visit.

Detroit is more than a Delta hub — it’s a beautifully diverse city that is now trendy with art, culture, and food hotspots all emerging from the rubble that was created by the great recession.

Detroit in terms of the number of blocks in a mile is similar to NYC:

What makes Detroit an interesting city for grid plans is how Detroit’s two separate orthogonal grids. Basically meaning one is slightly rotated compared to the other. Almost like an overlap. It’s using both NYC’s blocky grid plan and Paris’ rounding grid plan to make a grid plan influenced by those two cultures. 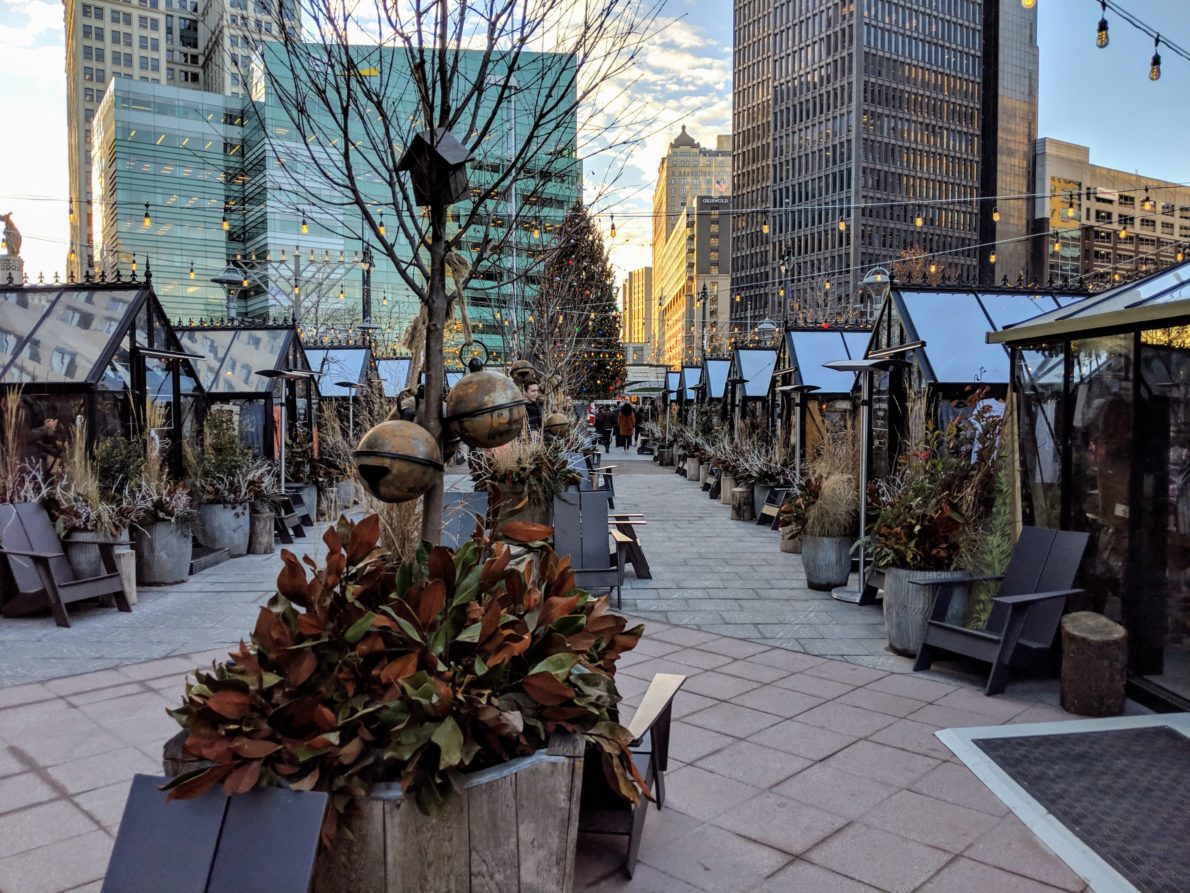 Chicago, the Windy City, is known for being the biggest midwestern city and a very walkable tourist destination, at least in downtown.

The direction you go in Chicago won’t have a huge difference for the number of blocks in a mile:

Chicago is a very walkable city for being flat and super consistent with its blocks. Even when there is a foot of snow on the ground with high winds and 0-degree temps during the winter, you might be surprised how the city keeps on moving.

The city that you probably have visited if you have flown Delta is Atlanta. Atlanta, however, is far more than just Delta’s headquarters, it’s also known for being a musical hub and city culture hotspot for the South.

If you’re traveling in downtown Atlanta, you will admire the perfect square block almost at every corner you go to. Each mile has:

No matter what direction you head, you will just need to know that it’s 18 blocks per mile in Atlanta. So, next time you have a layover or want to visit Coca-Cola, you will now know how many blocks it will take to get somewhere in downtown Atlanta.

Portland, is the land of micro-breweries and hipster vibes and one of the most interesting cities on the West Coast. You will never be disappointed with the eats you find, as franchises aren’t hipster enough while also drawing in some of the best drinks you might find in all of the USA.

Portland has almost perfectly square blocks with the same number of blocks in a mile no matter what direction you go. As they are smaller blocks, it feels more like a town instead of a city. Portland blocks per mile are:

Finding yourself in Portland will not only be enjoyable for amazing eats but also for the hipster culture. It’s definitely a great place to visit, no matter the generation you are in.

Miami is the destination where every teenager wants to go to for spring break and every EDM festival is held. It’s truly an American Airlines captive hub, but also the gateway city to South America. The city is also filled with many great eats that are influenced by South America and North American dishes, but also a nice young sunny vibe to the whole city with art everywhere.

Miami blocks do vary the direction you go, but as it’s sunny year-round, you won’t have to worry about the distance you are going. Miami blocks per mile are:

Travel tip: If you end up hitting up Miami, don’t forget to visit the Florida Keys that are nearby. It’s not only tiny islands with a more laidback vibe but also easily accessible via a short road trip.

Travel tip: If you end up visiting Salt Lake City with your ski or snowboard equipment, you will most likely fly Delta as it’s one of their hubs. So, knowing baggage fees for Delta will probably benefit you.

Knowing how many blocks are in a mile will help not only calculating the distance when you walk or drive but also a fun trivial night answer to wow all your friends.