The Aviator card from Barclays is one of the best travel cards for racking up miles in a hurry. That’s because it comes with a 60,000 miles bonus simply after making a single purchase within 90 days (although there is a $99 annual fee that’s not waived).

Even with the annual fee this is a great deal, but there’s also a companion pass perk that many aren’t aware of since it’s newer and not as highly publicized as the 60,000 point bonus. In this article, I’ll tell you everything you need to know about the companion pass offer here. 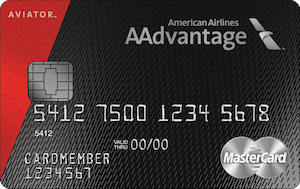 Some of these perks can be very valuable like free checked bags for up to four companions and preferred boarding (which virtually guarantees you overhead storage bin space). But in this article, I’ll focus on the companion pass perk and tell you how to earn it and how much value you can expect to get. If you’re looking for ways to maximize your American miles (or perhaps the 60K bonus), then click here.

What is the Aviator companion pass?

The Aviator companion pass is a special perk that allows a companion to fly with you on a roundtrip economy ticket after only paying $99 + taxes and fees. Government taxes and fees range between $21.60 and $43.20 so you’re usually looking at total fees of about $130 for the roundtrip companion ticket. That sounds high but if the air fare is round $400+, that’s some pretty good savings.

You’ll get a companion pass certificate after you make a purchase within 90 days of signing up and then an additional companion pass each year if you meet the spending requirement. I’ll talk about each of these below.

You’ll earn the intro companion pass after making a single purchase within 90 days of opening up your card. This companion pass is in addition to the sign-up bonus, so it’s a pretty valuable deal considering the average value of the companion pass perk is around $300 (according to American Airlines flight attendants).

After you make the purchase Barclays states to allow 8-10 weeks for delivery of the Companion Certificate after the qualifying purchase has posted to your card account and the annual fee has been paid in full. In reality, this pass could hit your account much sooner so just be on the lookout for it.

The anniversary companion pass is much different from the intro offer because you’ll have to put down a good amount of spend to get it. To get the companion pass every year, you’ll need to spend $20,000 or more in eligible purchases during the cardmember year (each 12-month period through and including your Card Account anniversary month). Also, your account will need to be open for at least 45 days after the anniversary date.

I’m personally not a huge fan of spending $20K for a simple companion pass for a couple of reasons. First of all, I’d much rather put spend on a card like the Sapphire Preferred or Sapphire Reserve to earn up to 3X on my travel/dining purchases and also put spend on something like the Gold Card or Blue Business Plus from Amex to rack up points on supermarkets (4x) and non-bonuses spend (2X).

Second, I’d rather pursue Hilton free nights for $15K worth of spend with cards like the Ascend, since I’d get more value from those (usually $400+). In the end, these types of bonuses are highly specific to your needs so I’m not saying it’s never worth it — just make sure you’re aware of the alternatives (especially if they include hitting other sign-up bonuses).

For residents of Alaska and Hawaii, Companion Certificate eligible travel is defined as round-trip travel originating in either of those two states and continuing to the 48 contiguous United States.

Should you get the card now?

There are a couple of things to consider here. The first is that Citi also offers American Airlines cards (usually with the annual fee waived), so it’s often a good idea to stack these cards together (you can get both). Citi is moving to a 48 month rule so you’ll only be able to get a bonus for a card every four years (subject to exceptions like potential targeted offers), so you’ll want to account for that change with your credit card strategy.

Another thing to consider is your 5/24 status. If you are under 5/24 (you have NOT opened up five accounts in the past 24 months) then the smartest credit card strategy will likely be to first jump on some of the best Chase cards.

For many people, it would make much more sense to jump the 60,000 point offer for the Chase Sapphire Preferred. Or you might even go for a card like the Chase Ink Preferred with its ultra-high 80,000 point offer. The Sapphire Reserve and Chase Ink Cash could be great options as well. Aside from having great bonuses and bonus earning potential these cards are worth looking at because you can’t get approved for these cards if you’ve opened up five or more accounts in the past 24 months.

The Aviator card will always be around and so there’s really no rush for this card, especially if you’re under 5/24. Barcalys has imposed their version of the 5/24 rule at times but it’s known as the “6/24 rule.” This is not enforced as stringently as the Chase rule though so it’s more of a soft rule. But still, if you’re really interested in the Aviator, it wouldn’t be a bad idea to go for the Aviator right after hitting 5/24.

I’ve always loved the Aviator and I really like that it comes with the companion pass now along with the high bonus of 60K. The annual fee is not waived so you’ll have to consider that but the bigger factor is that you don’t want to fill in a 5/24 slot with this card in most cases since you can always pick up this card after your 5/24 slots are filled.