Plaza Premium Lounges have interested me for a while. Many of them are part of the Priority Pass lounge network and you can also get admission into them with the lounge access from the American Express Platinum Card. I’d heard somewhat mixed things about these lounges for a while, so I was excited to finally try one out and see how it measured up to other lounges. Here’s my review of the Plaza Premium Lounge at Terminal 1.

I was given access to the Plaza Premium Lounge with my business class boarding pass for Thai Airways on the 777-200. That was an interesting experience on a pretty dated aircraft and you can read about that flight here.

After getting through security, I followed the VIP lounge signs and made my way over to where many of the lounges are located in Terminal 1. 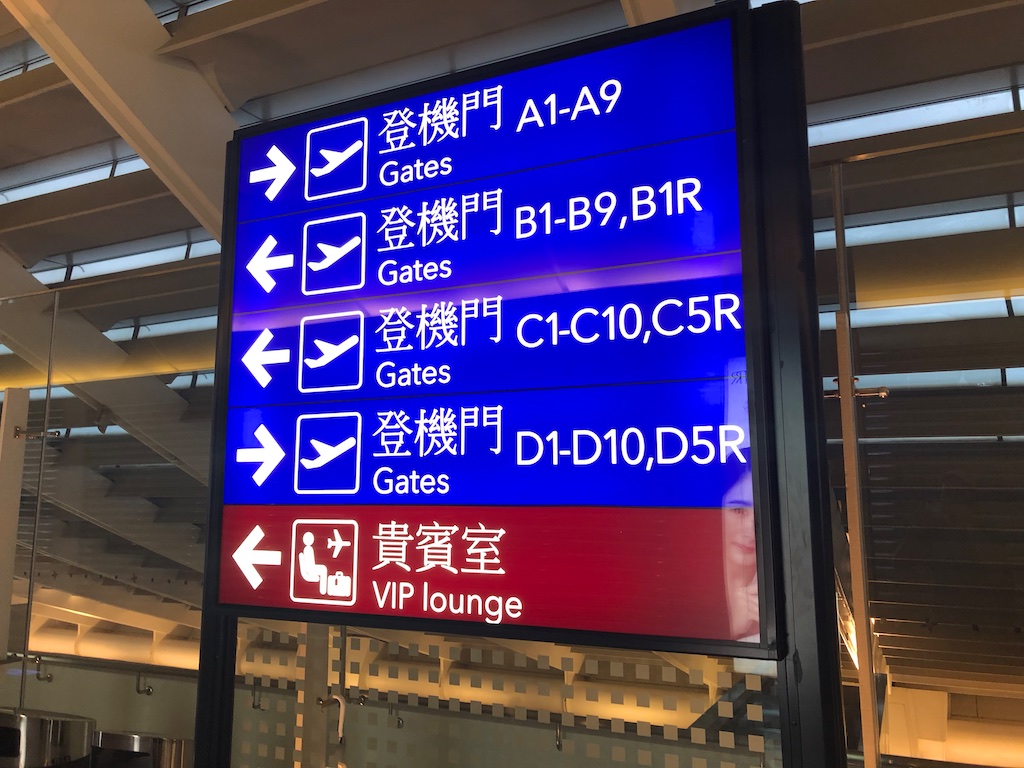 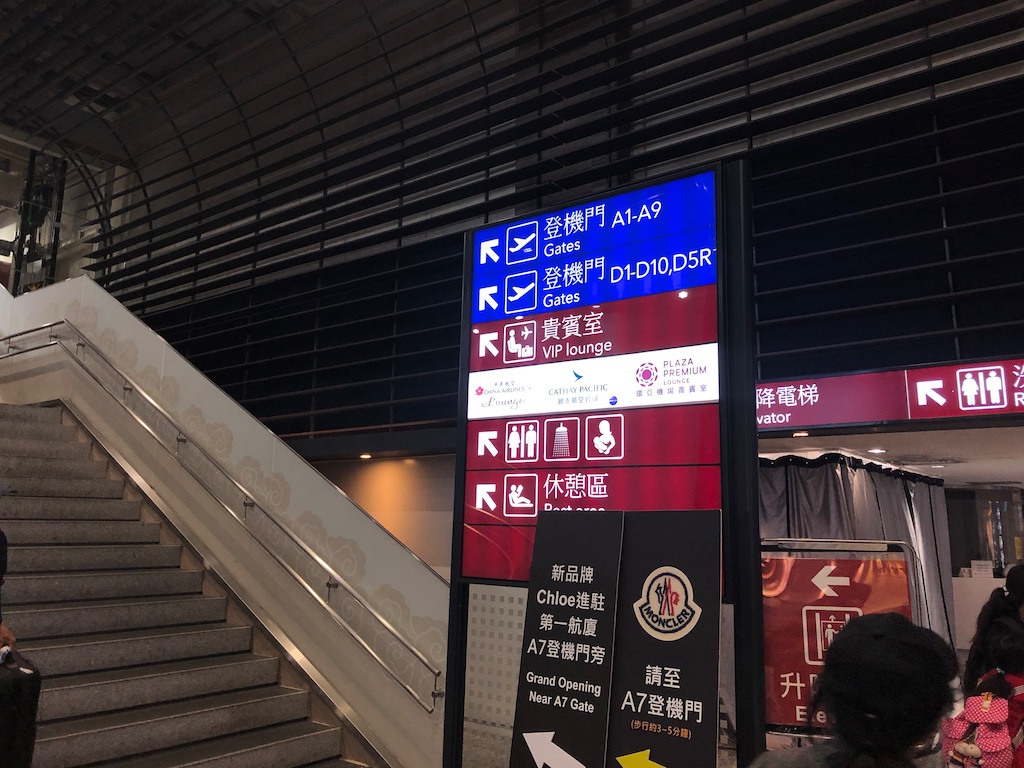 I made my way up the stairs to the fourth floor and first saw the Cathay Pacific lounge and then the entrance for the first Plaza Premium Lounge. This Plaza Premium Lounge was not open at the time, however and it had a sign pointing me (both ways), so I just kept walking down to to check out the other lounge and that’s the one I entered, which I believe was the Zone D lounge. According to the map above, there’s also a Thai VIP Lounge but I don’t recall that being open when I visited.

The Plaza Premium Lounge is a relatively small lounge but feels very cozy. When I entered, I went directly to the seating area on the left side of the lounge. There were several comfortable chairs there with tables that came with power outlets and lamps.

I really liked the homey vibe at the lounge and it was also nice that crowds were never an issue and I basically had an entire third of the lounge to myself.

Some of the seats have ottomans in front so you can really get comfortable on them. I also appreciated the coffee tables when working from the laptop.

Some of the seats had international outlets built in to the seat, along with USB ports so the seating was very functional.

I also noticed a reserved section that was completely empty. I thought I read something about being able to pay to reserve a spot in this section but I’m not sure how accurate that was.

The front area of the lounge has about ten little pods that you can work in or enjoy your meal in. These also have outlets in them. The set up reminded me of a miniature version the Korean Air First Class lounge. While these cubbies were not very tall and looked a little cramped, they did offer a fair amount of privacy.

There’s a partition in the middle of the lounge that divides the cubby area from the dining area. After locking down a comfortable chair in the corner, I then ventured over to the dining area. The lounge offered a decent selection of hot dishes to choose from and they had items for Eastern and Western breakfasts. You can sit at one of the two tables for eight or at some of the tables on the perimeter of the dining room. There was a good flow of people in the dining area when I first arrived but it thinned out after about 30 minutes or so.

I thought the lounge offered a pretty decent variety of hot-food options. Here’s a look at the food offered for breakfast.

There were plenty of options for beverages including a soda machine, espresso, wine, beer, tea (with hot water machine).

There were also canned beverages but I didn’t know what they were.

They also had some snacks including cereal, nuts, cookies, and a couple of baskets of apples. 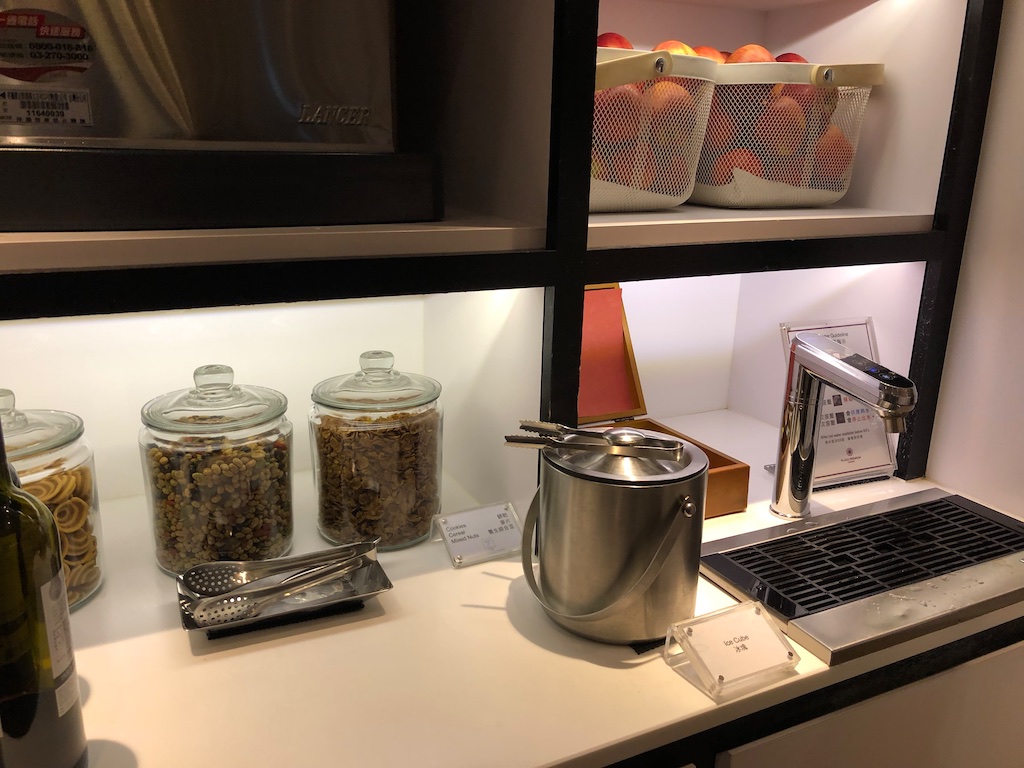 The bread was also popular with a lot of people. 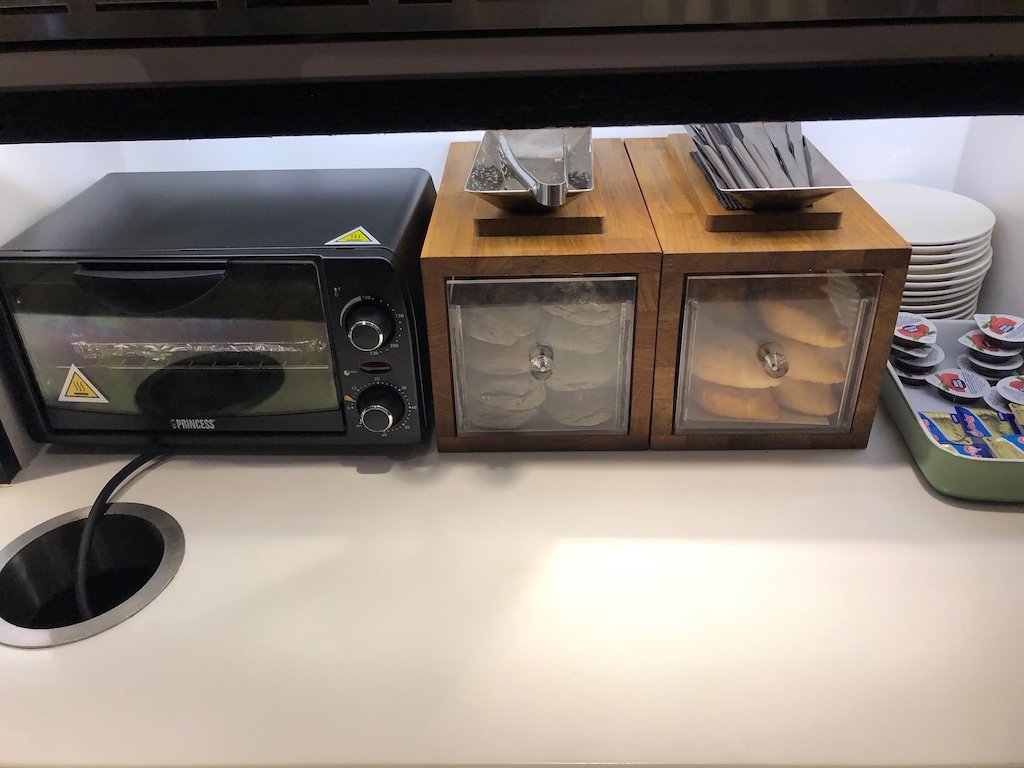 On either side of the lounge, there was a large tv with literature. 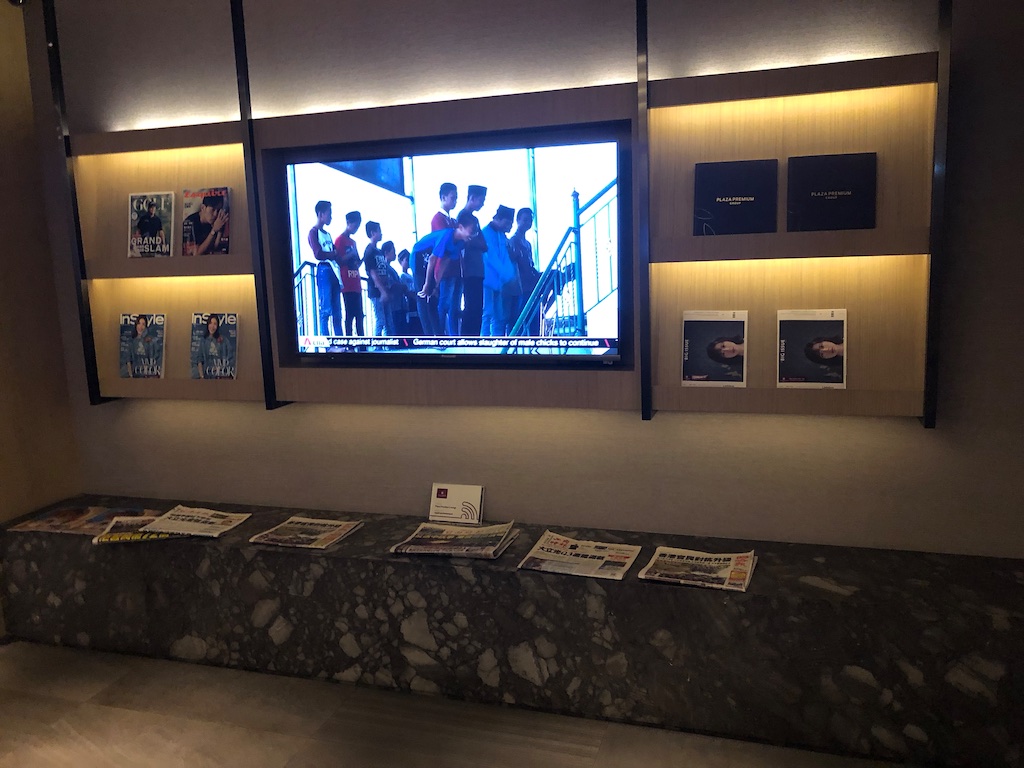 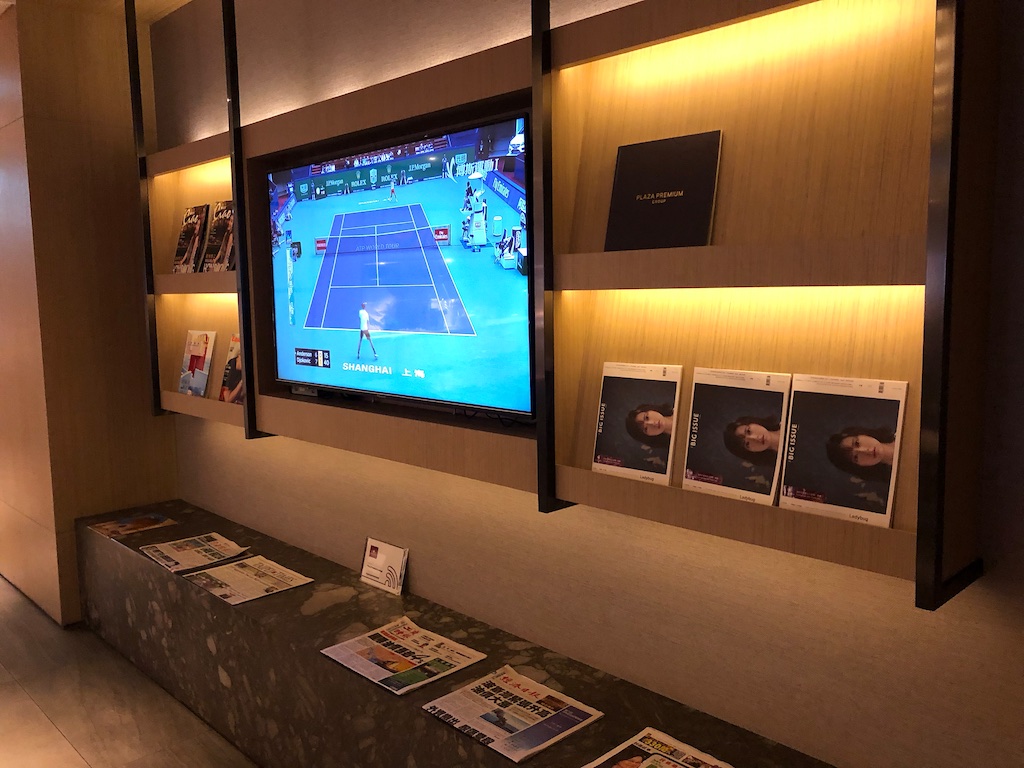 You could also find a screen with flight information. 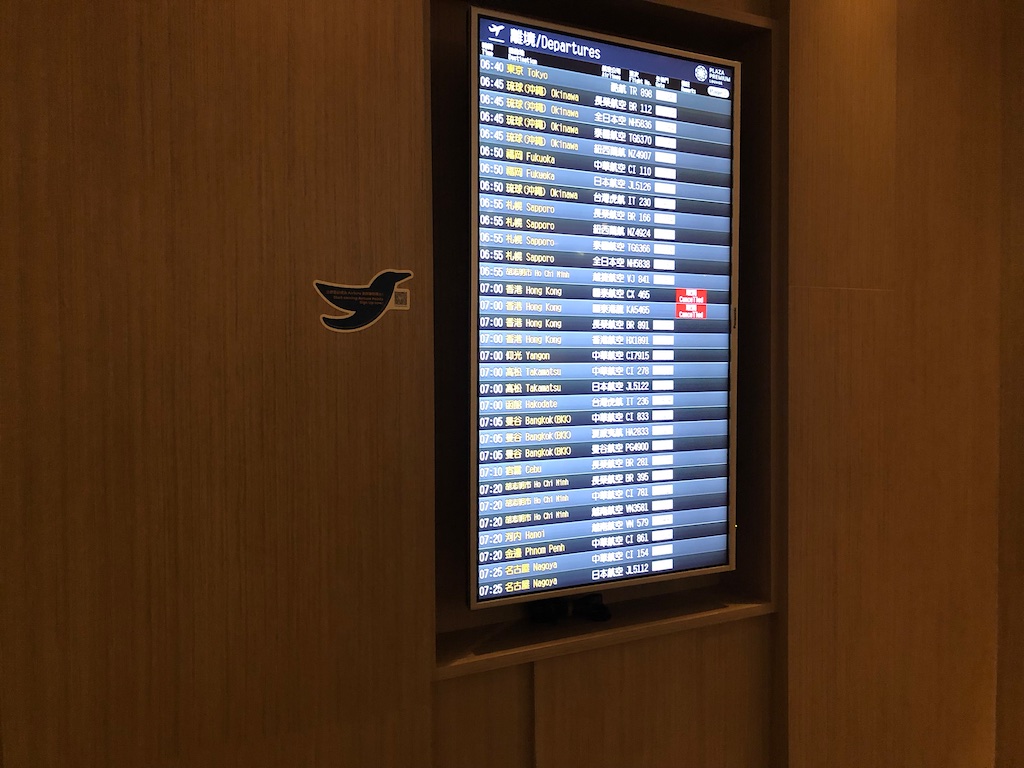 I believe that this lounge did have a shower but I didn’t end up checking it out.