A lot of people book domestic first class seats on United but don’t really know what to expect. Depending on the type of aircraft that you are flying on (737, 787, 777, etc.), the experience could be drastically different. In this article, I will give you a breakdown of what you can expect when flying first class with United Airlines on domestic routes when it comes to things like the seats and meals.

Note: United first class on domestic routes is the same as “business class” for the most part. The terms are used interchangeably by many but for this article I’ll just used first class to describe this cabin.

Before you book your United first class flight, you should know a few things about the aircraft and routes.

For the most part there are two different types of United Airlines first class experiences when flying domestically. There is the traditional first class seat that is basically a larger and more comfortable economy seat with more recline ability and leg room. You’ll find these on aircraft like the 737 while aircraft like the Embraer may have a slightly different type of seat.

Then there are the wide body aircraft that (mostly) have the lie flat seats. You can find these on various routes. Anytime I ever fly first class to the West Coast or to New York from Houston, I always use Google Flights to search through the different flight options to see which of the flights are served by a wide body aircraft.

Contrary to what you might expect, the cash price for flying in a small body versus flying in a wide body is not always different. For example, I looked up a first class flight from IAH to LAX and the cash price came out to $364 for both. One flight was on a 737 with a standard recliner and the other was on a 787 with a lie-flat seat, as shown below. So while the cash price was the same, the potential for comfort was definitely not the same.

If you want to book a first class award flight with miles, it will cost you 25,000 miles one way for a saver award. But keep in mind that United has been shifting to a dynamic award pricing so prices could be higher in the future.

Also, you may need to add 10,000 miles to that total for a premium transcontinental route. For example, it might cost you 35,000 miles one way to fly business class from New York to Los Angeles or New York/Boston to San Francisco.

I’ve struggled a lot to find open saver awards for first class flights on United so I would generally not expect to find a lot of open awards on premium transcontinental routes. However, with a lot of routes from Houston I have found availability to be at least decent at times. 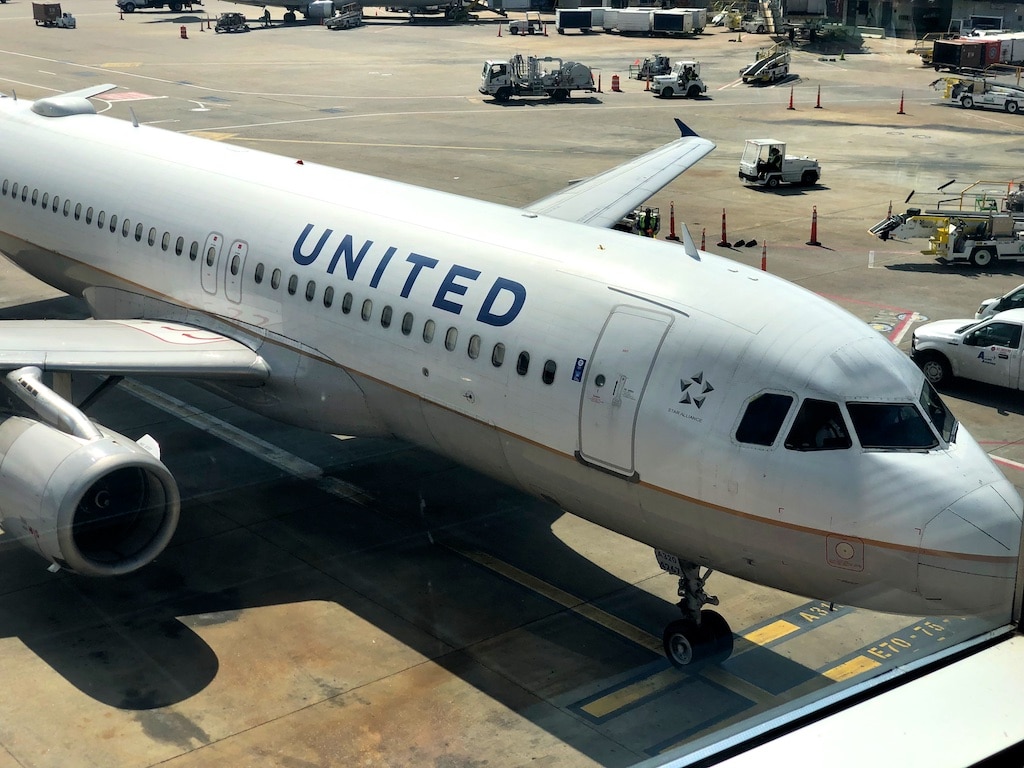 Tip: Don’t miss out on my #1 rated travel card. The Chase Sapphire Preferred is now offering a new high offer of 60,000 points (worth $750 in travel) after spending $4,000 in the first three months after account opening! For the longest time this offer was stuck at 50,000 points so you don’t want to miss out on this better opportunity. Find out more here.

If you are flying first class with United, you will be given United Premier Access.

The biggest benefit of this is that you will have your own separate check-in area. I’ve never really seen the lines very long in the Premier Access area. So typically we are able to print out our boarding pass and check our bags in very efficiently.

When you enter this area, notice that some desks are designated for certain elite levels, such as 1K. If there are no passengers lined up at those desks, and you are currently waiting in line, feel free to head over to one of those desks and they should help you out.

You also will get access to a priority line through security in many cases. This line is usually very easy to locate because all you have to do is look for the “Premier Access” signs pictured below. While this line is very convenient, I typically just go through the TSA Pre-Check line (read more about TSA Pre-Check here). That’s because I don’t have to worry about taking my electronics out of my bag or removing my shoes among other benefits.

One of the exciting parts about flying first class typically is that you get to enjoy airport lounge access. I have to admit that United Club lounges are nothing special. The newer lounges look great but the food and drink offerings are still pretty basic. I’d much prefer an American Express Centurion Lounge over a United Club Lounge, though those can have overcrowding issues.

When flying United first class domestically, you typically will NOT have access to the United Club Lounges.

The exception to this is whenever you are flying a premium transcontinental route. These are those long routes mentioned above that are between places like San Francisco and New York, LAX and New York, etc.

However, if you are flying internationally (even to a close destination like Mexico) you will be given United Club Access. This is true even if you are flying on a smaller aircraft like a 737 that does not have lie flat seats.

If you are interested in getting United Club access then you might want to look into cards like the United Explorer Card. With that card, you can get two annual lounge passes each year along with some nice benefits like free checked bags and priority boarding. You can read the full review of the card here.

When you are flying first class, you will be able to board with Group 1. When you arrive at the gate, you should see a boarding group sign with a line designated for Group 1 (see the image below) and that is where you will line up.

You will still have to wait for the pre-boarding and for other groups, such as United Global Services and United 1K. However, you will still usually be among the first people to board the plane.

Of course, some people don’t like to sit on the plane any longer then they have to so they don’t prioritize arriving to the boarding area early.

The flight experience is going to vary dramatically between a wide body aircraft and a smaller aircraft like a 737. Since most people flying first class on a domestic route with United Airlines will be on a smaller aircraft, I’ll focus more on that.

On a smaller aircraft like a 737, you usually will see about four rows of business class seats. On a 737-700, there could be as few as three rows and on a 737-900, there could be up to five rows. Either way, typically the first class cabin is going to be pretty compact.

You’ll also have your own lavatory up front that should only be open to first class passengers though the occasional economy passenger finds their way in sometimes.

First class seats on the 737 are definitely much more comfortable than economy seats. They are much wider (about 4 inches wider) and give you a lot more legroom (about 7 inches more) and they have a 2-2 configuration. Smaller aircraft like the Embraer will have a 1-2 configuration.

Your seats should come equipped with power outlets, making it easy to keep your electronics charged up. This is really nice on some of the aircraft that do not have screens built into the seat in front of you. (While you might expect all first-class seats to have in-flight entertainment with screens that is not case.)

There is a mini tray you can pull out between the seats that is convenient for placing drinking glasses on and then a full tray table can be pulled out from your outside armrest. To recline your chair you simply hit the silver button on the side of your chair and if you want you can adjust the headrests to your liking.

If you are able to fly on a wide body aircraft with lie-flat seats the experience will be much more comfortable. The cabin will feel bigger and more open but you will also have many more passengers in the cabin with you. The configurations can vary for wide body aircraft and you might see something like (2-2-2, 2-1-2, or even the dreaded 2-4-2).

You will be able to enjoy a fully lie flat seat which (while definitely not industry leading) is better than just a reclining seat in my opinion. That is because you can position this chair in many more different positions to find whatever is most comfortable for yourself.

You will also have a larger TV screen and better options for in-flight entertainment. 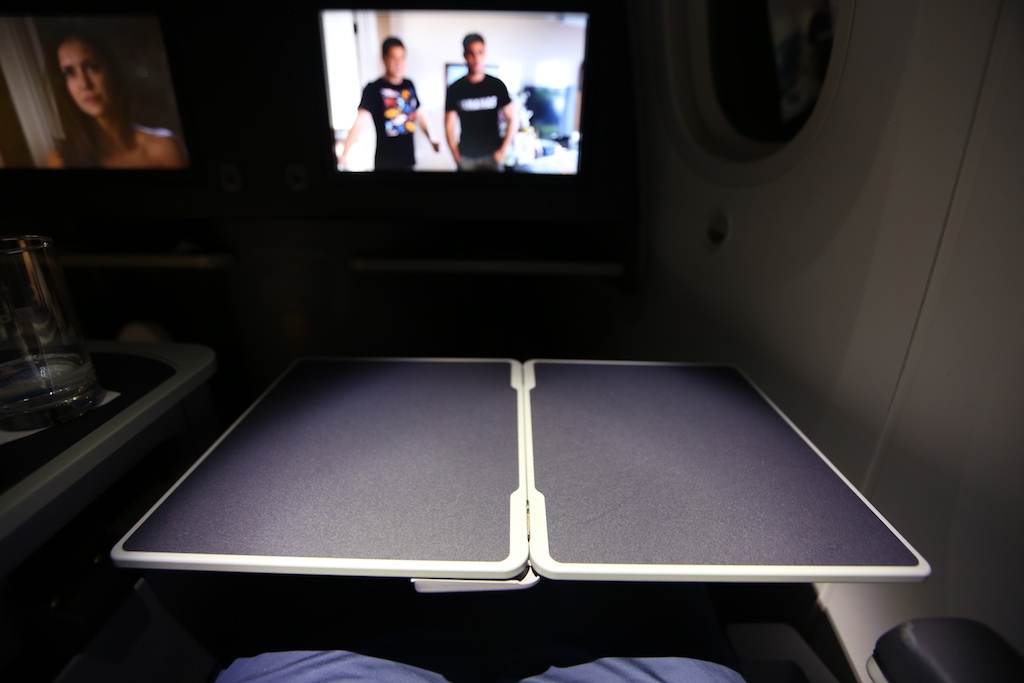 United first class dining is not going to be on par with some of the more renown airlines like Singapore Airlines, Cathay Pacific, etc. But, at the risk of losing all my credibility, I will venture to say that some meals that I’ve eaten on United first-class domestic flights have not been that bad and actually quite satisfying.

Typically, you’ll get some warm nuts and then will be offered two options to choose from (assuming that both are available after the top-tier elites have chosen their meals). While I would not necessarily ever look forward to a meal with United with great anticipation, I’ve honestly enjoyed a few dishes over the past few years.

My biggest strike against them would probably just be the presentation of the food sometimes. They seriously make the food look much grosser than it actually is (which I realize is not a problem unique to United).

I will say that on some other occasions the food has been flat out crap, so it really tends to be a hit or miss thing with United first-class dining. But when it comes to desserts, especially cookies, they usually have something very good so at least that is one consistent quality.

Another feature of United first class that can be hit or miss is the service. I’ve had some pretty disinterested and borderline rude flight attendants but for the most part I’ve been pretty satisfied with the quality of service onboard.

Your luggage should be marked as priority whenever you are flying United first class. What this means in theory is that your bag should be one of the first bags available for pick up whenever you are at baggage claim. This does not always happen although I will say that the last few domestic first class flights I have had on United, I’ve received my bags very quickly.

Flying first class on a domestic flight with United can be a little underwhelming if you are expecting things like lounge access, lie flat seats, and gourmet meals. However there are ways to seek out lie-flat seats and and there are some perks that are always available like priority check-in and boarding that make the experience better.